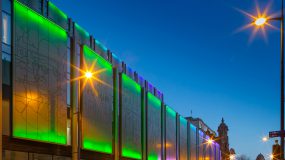 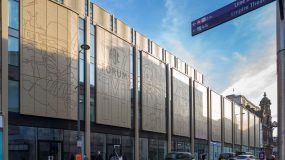 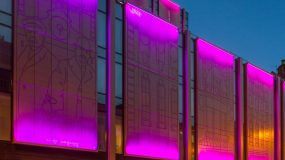 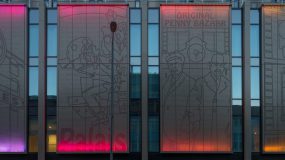 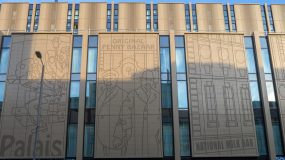 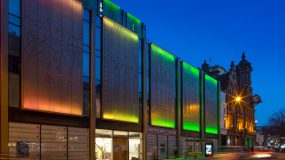 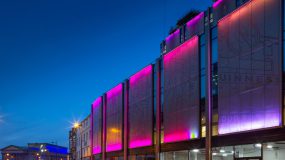 The £40 million gateway scheme in Liverpool’s Lime Street features spectacular artwork commissioned from local artist Anthony Brown, depicting some of the forgotten stories of one of the city’s most famous streets across 11 giant panels displayed above shops and restaurants, featuring Ash & Lacy’s Perforated Metal Façade system.

Designed by Broadway Malyan and forward funded by Curlew Capital, and delivered in a partnership between Liverpool City Council, ION Development and Sigma Inpartnership, the project saw the clearance of a series of run-down buildings and the development of new retail, leisure, hotel and student accommodation. Renovation work also encompassed the refurbishment of the listed former ABC Cinema which occupies a prominent location opposite Liverpool’s mainline station.

Ash and Lacy worked closely with Anthony Brown to achieve his goal of creating a “Quantum Timeline”, the artist having meticulously researched the area’s history from Victorian times to the present day.

Themes covered in the murals include the story of how Lime Street got its name, the Beatles’ song Maggie Mae, the famous old Guinness Clock and the ABC and Scala Super Cinemas. They are LED backlit at night to create an even more stunning effect. 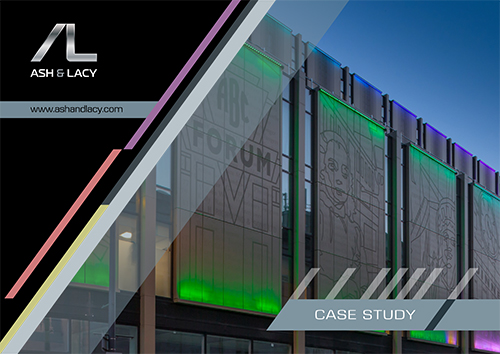 We use cookies on our website to give you the most relevant experience by remembering your preferences and repeat visits. By clicking “Accept”, you consent to the use of ALL the cookies. However you may visit Cookie Settings to provide a controlled consent.
Cookie settingsACCEPT
Manage consent

This website uses cookies to improve your experience while you navigate through the website. Out of these cookies, the cookies that are categorized as necessary are stored on your browser as they are essential for the working of basic functionalities of the website. We also use third-party cookies that help us analyze and understand how you use this website. These cookies will be stored in your browser only with your consent. You also have the option to opt-out of these cookies. But opting out of some of these cookies may have an effect on your browsing experience.
Necessary Always Enabled
Necessary cookies are absolutely essential for the website to function properly. These cookies ensure basic functionalities and security features of the website, anonymously.
Functional
Functional cookies help to perform certain functionalities like sharing the content of the website on social media platforms, collect feedbacks, and other third-party features.
Performance
Performance cookies are used to understand and analyze the key performance indexes of the website which helps in delivering a better user experience for the visitors.
Analytics
Analytical cookies are used to understand how visitors interact with the website. These cookies help provide information on metrics the number of visitors, bounce rate, traffic source, etc.
Advertisement
Advertisement cookies are used to provide visitors with relevant ads and marketing campaigns. These cookies track visitors across websites and collect information to provide customized ads.
Others
Other uncategorized cookies are those that are being analyzed and have not been classified into a category as yet.
Save & Accept
Powered by